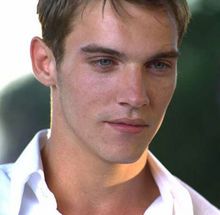 This scene takes place in the Bhamra’s living room with the whole family.

Jess, Mrs Bhamra and Mr Bhamra are eating when they hear the doorbell ring. Pinky yells “I’ll get it!” and she runs for the door, probably thinking it would be for her. When she opens it we can see the disappointment on her face, and she simply says “yeah?” Joe has turned up at their door wearing his best clothes and looking very smart and respectable. Pinky asks Jess why she has bought home brought home a Gora. “His Irish,” says Jess. “Yeah well they all look the bloody same,” Pinky replies, instantly putting a stereotype on his head. No one looks too pleased to see Joe, not even Jules as she knows he has turned up because Jess had lied to her parents.

While Jess is serving tea, we see Joe look up at Babaji. It is almost like he feels intimidated with Babaji staring down at him. That immediately shows us the two different cultures. Not only is Babaji staring at Joe, but Mr Bhamra is giving Joe the stare as well and Mr Bhamra doesn’t look very comfortable having Joe in his house. Why do you think this might be?

There is lots of tension in the air in this scene and if you look at the positions in which everyone is sitting, we can see Mr Bhamra, Mrs Bhamra and Pinky are all sitting quite close together. While Jess is actually sitting in their group on their side, she is as far away as she can get on the coach from her family and is as close as she can get to Joe, who is sitting on a single chair on the opposite side of the Bhamra’s. Joe is sitting on the edge of his chair, probably feeling a bit out of place, Jess is slouching and looking down, feeling ashamed and guilty, Mrs Bhamra and Pinky are sitting upright and ladylike and Mr Bhamra looks very much like the king of the scene, sitting on an arm chair very comfortably.

Joe begins to tell Jess’ parents that he did not know that they did not know Jess had been playing on the girl’s football team. He says Jess has tremendous potential but is soon interrupted by Mr Bhamra who tells his story of when he was kicked out of his cricket team because he was Indian. Jess and Joe try to tell Mr Bhamra that things are changing, but he won’t listen. Mr Bhamra explains he doesn’t want Joe building up Jess’ hopes because she will only end up disappointed like he was.

Joe soon leaves, having no success and looking quite disappointed in the outcome of his visit. Joe explains to Jess that they have been invited to play for Germany and it was a shame she’d miss it. You can see the jealousy on Jess’ face and hear it in her tone. Just before Joes leaves, he slips in a sneaky comment. “Your parents don’t always know what’s best for you,” he says this suggesting her parents have made the wrong decision for her and she should keep fighting for what she believes in. 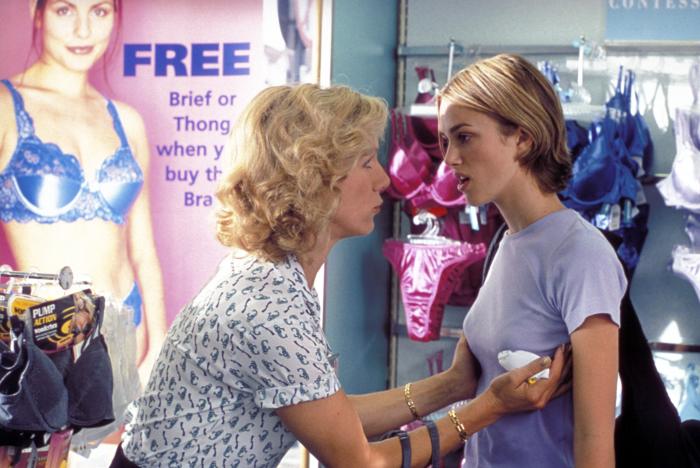 Scene: Jules and her mum shopping for bras

This scene is set in a Mrs Paxon’s bra shop. It starts with Jules’ mum pumping up padding. Jules comments “I wouldn’t be seen dead in that,” and Mrs Paxon replies, “They’re all the rage poppet! You blow 'em up, just like a lilo. Look, this little pump comes free with it. Pop it in there in the valve, pump pump pump away, up it goes, then slip it back in there.....and boom! Cleavage! They're perfect while you're still growing 'cause they lift you right there.” Just from these little comments, we can already see the differences between the mother and daughter. Mrs Paxon is very feminine and into all the latest fashion and clothing, whereas Jules couldn’t care less.

Jules starts to walk toward the sports bra section and Mrs Paxon holds up all the pretty bras commenting on how they work. “Well there's the Fleur, that's pretty, and the gel bra, that's a clever one - no pumping, it's already in there. Oh no sweetheart, not the sports bras! They're so plain! They don't enhance.” Mrs Paxon is frantically trying to stop Jules from choosing the sports bras. Jules quotes “well no one’s going to see them.” Mrs Paxon replies “no, but it’s how they make you feel!”

Mrs Paxon tries so hard to make Jules like herself. She wants Jules to be feminine and girly, just like ‘all the other girls.’

Mrs Paxon and Jules have two completely different personalities and just in this scene we can see it all. The look on Mrs Paxon’s face when Jules looks at the sports bras is pure disappointment.